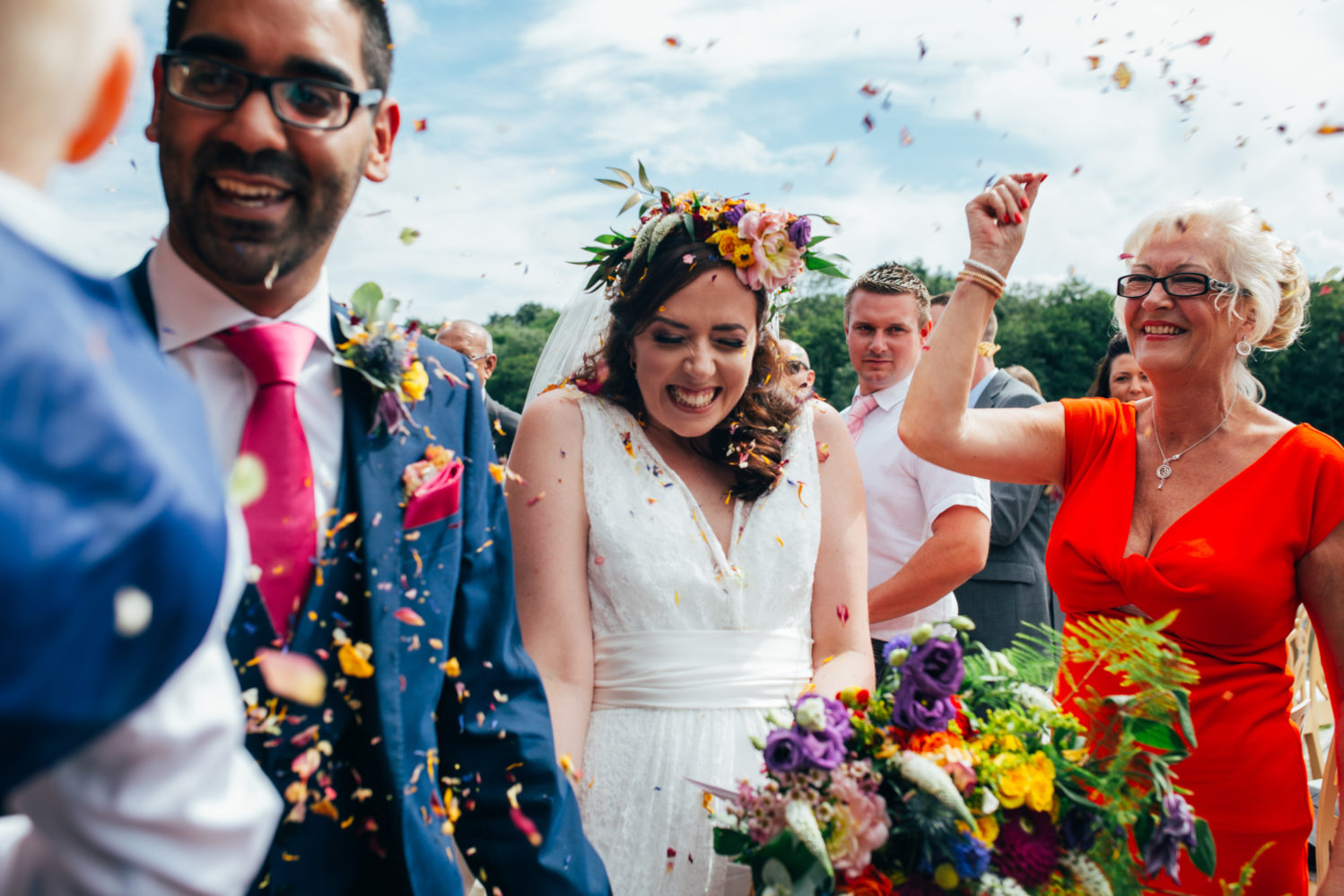 As a wedding photographer, without a doubt the confetti is one of the most fun parts of any wedding day. I absolutely love it. Having photographed more confetti throws than I can remember, here’s some tips for confetti pictures that I’ve picked up along the way – just to make sure your confetti shot is absolutely perfect! 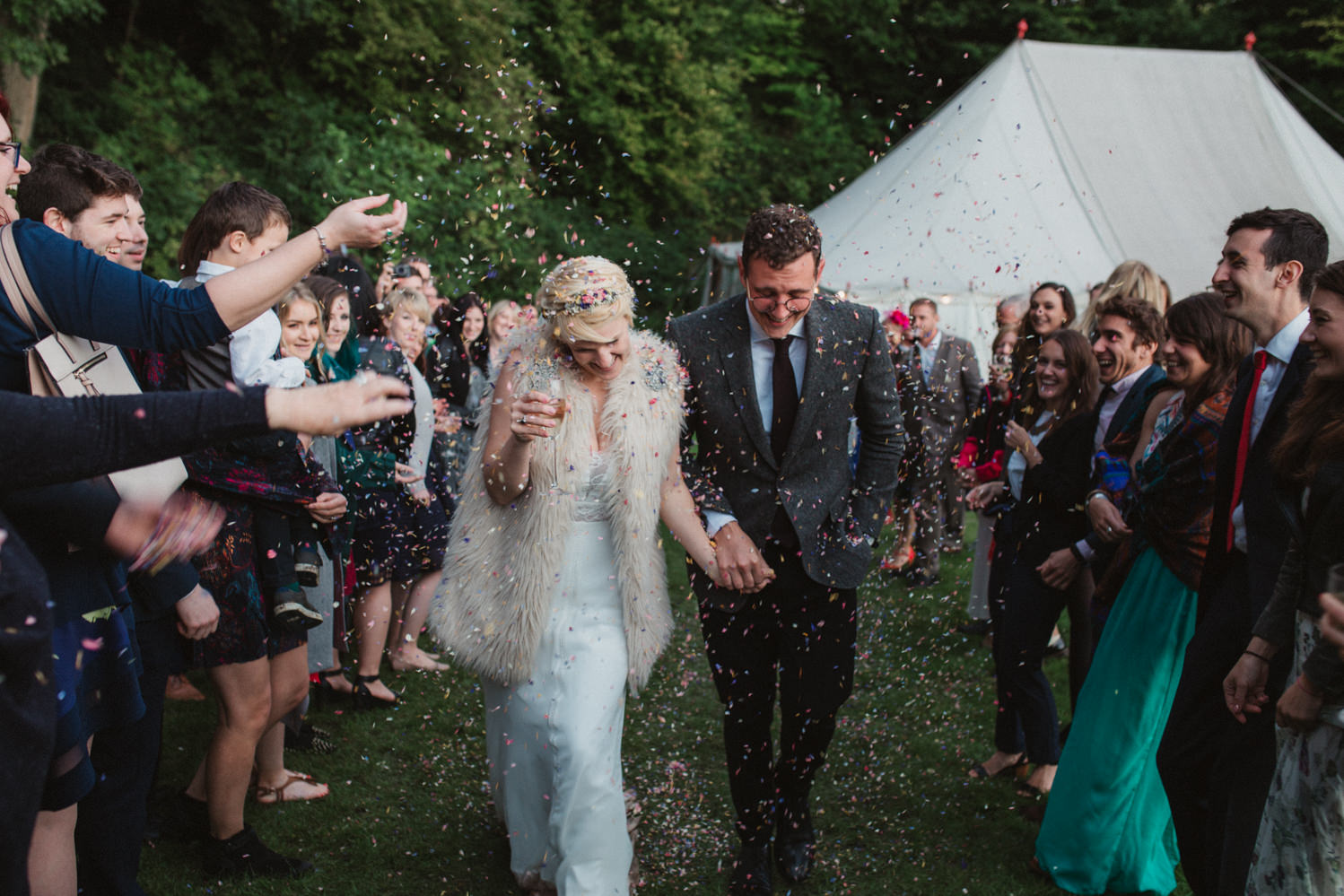 Traditionally, confetti throws happen as the couple leave the ceremony, but more and more frequently I find that churches and other venues only allow confetti in certain areas. I suppose it’s fair enough, it goes everywhere! Make sure you chat to your church or wedding venue to see what and where they allow. Rules differ between venues – some only allow dried flowers, some allow anything – just think of the environment and make sure it’s biodegradable! 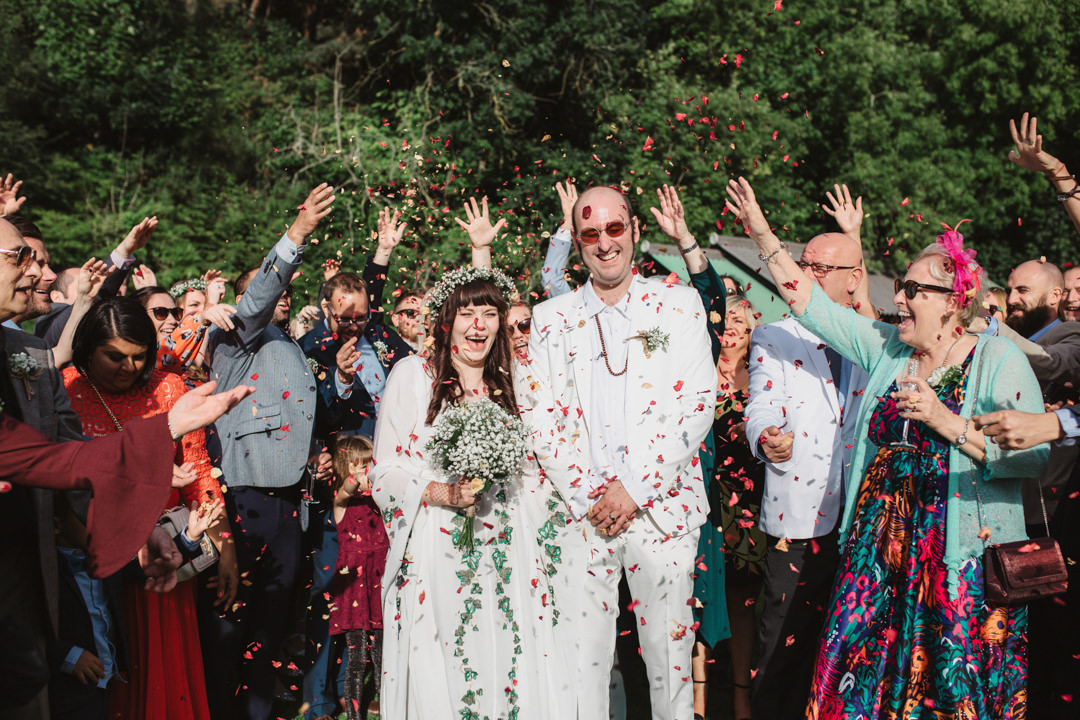 In years gone by, every guest would come armed with confetti. Nowadays, not so much. Your parents and grandparents most likely will, but from experience, most friends haven’t even thought about confetti until it’s time to throw it and they look sheepishly around to see if they can share some with Aunty Jane. I’ve had a confetti throw where there was literally only two boxes and they attempted to share it round all of the guests – hardly the fun, colourful throw the couple had envisaged! Don’t leave it to chance – if you want to do a confetti throw then ensure you’ve got a big basket for everyone to grab a handful from or cones or boxes for bridesmaids and groomsmen to hand out. 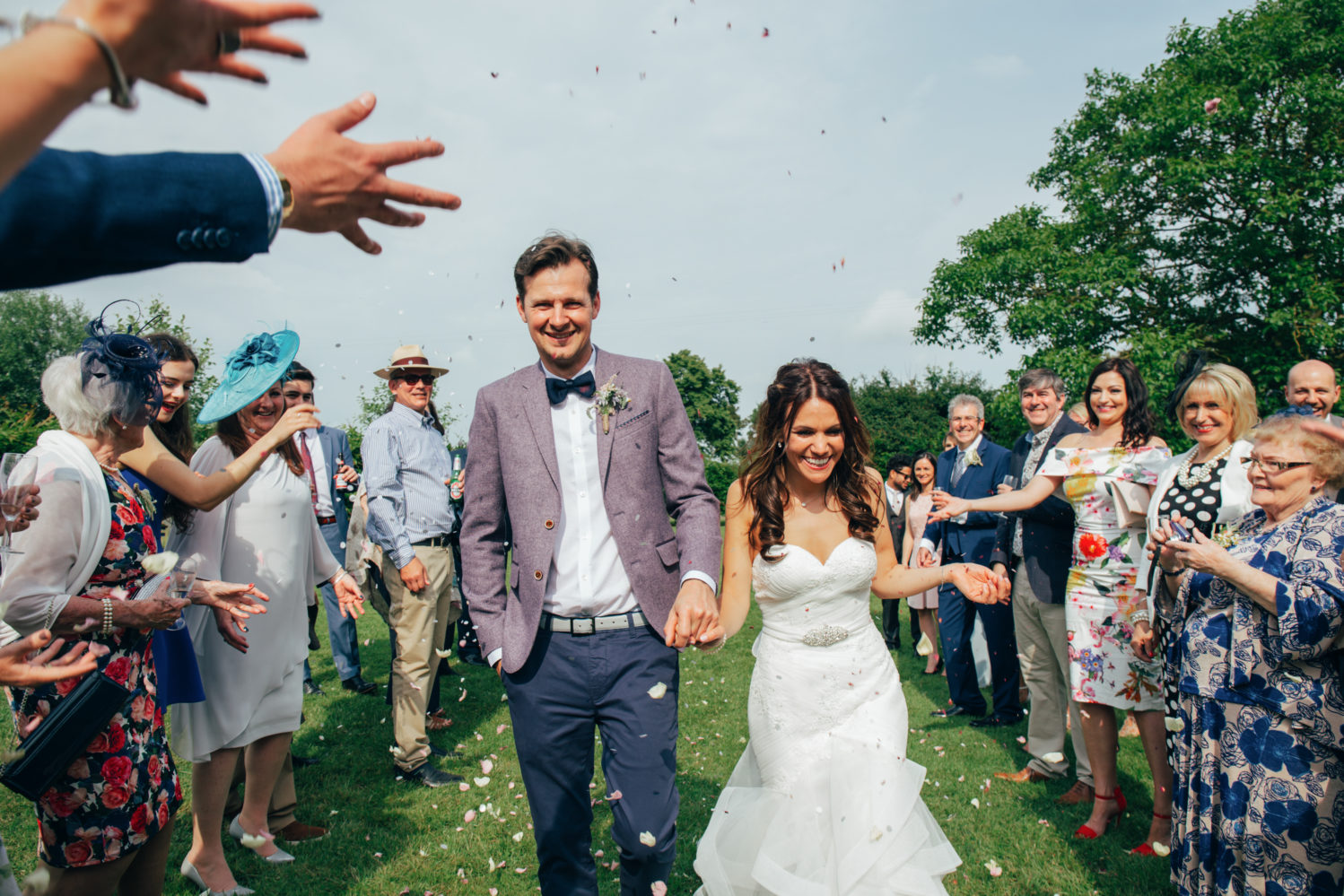 Now, I’m not saying there’s anything wrong with white or plain confetti, but in my opinion, the more colourful the better! I prefer the medium or bigger sized confetti pieces too – it just looks so much more impressive when thrown! 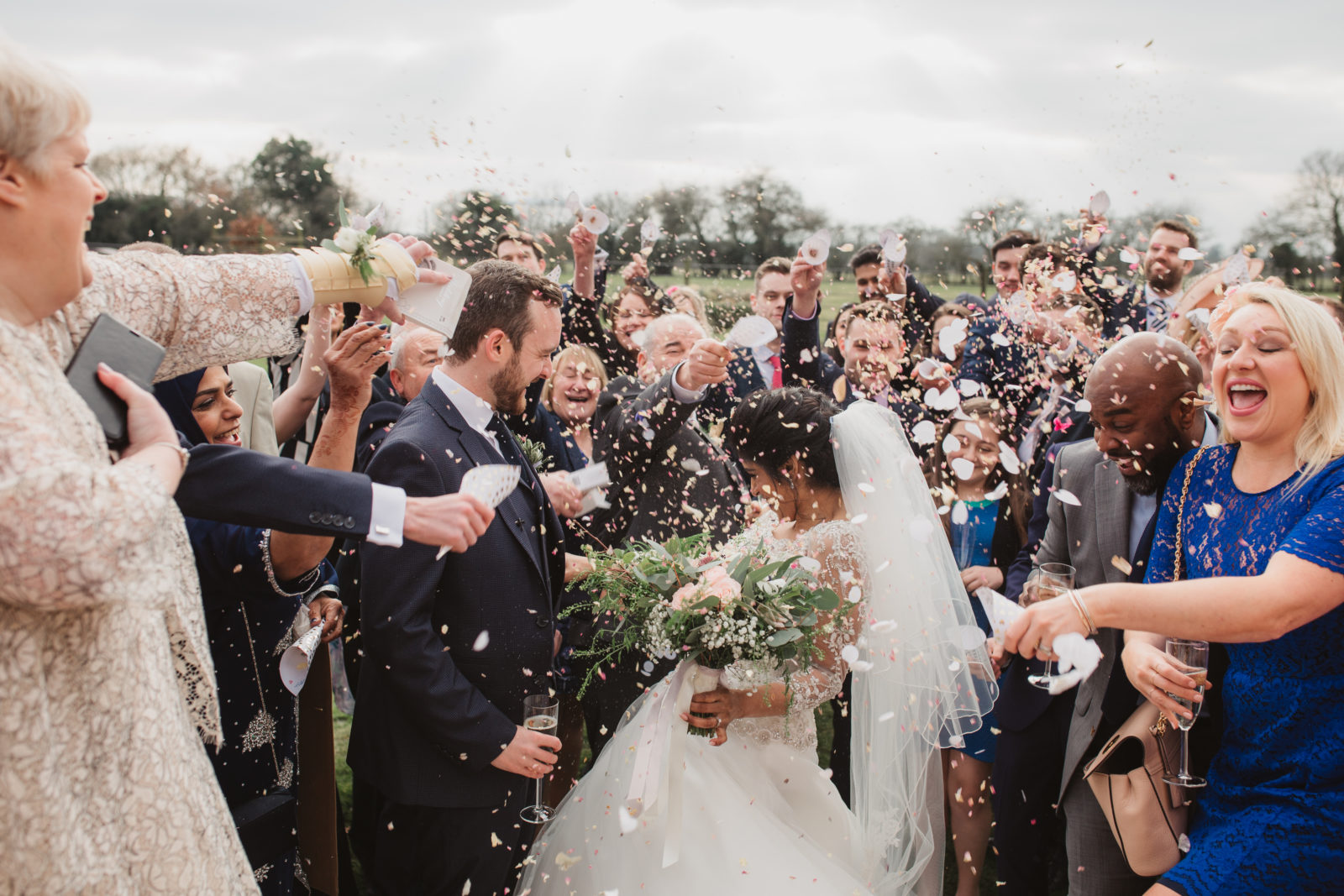 Have your guests to throw the confetti up in the air rather than at you all the better! When they throw it at you, you’ll just end up with loads of it in your mouth, nice! Your photographer might even get a few hilarious shots of you spitting it out as well as your big ol’ grin as you walk down the confetti line. ‘Throw it above them, not at them’ is something I’m always shouting before my brides and grooms start walking, ha! 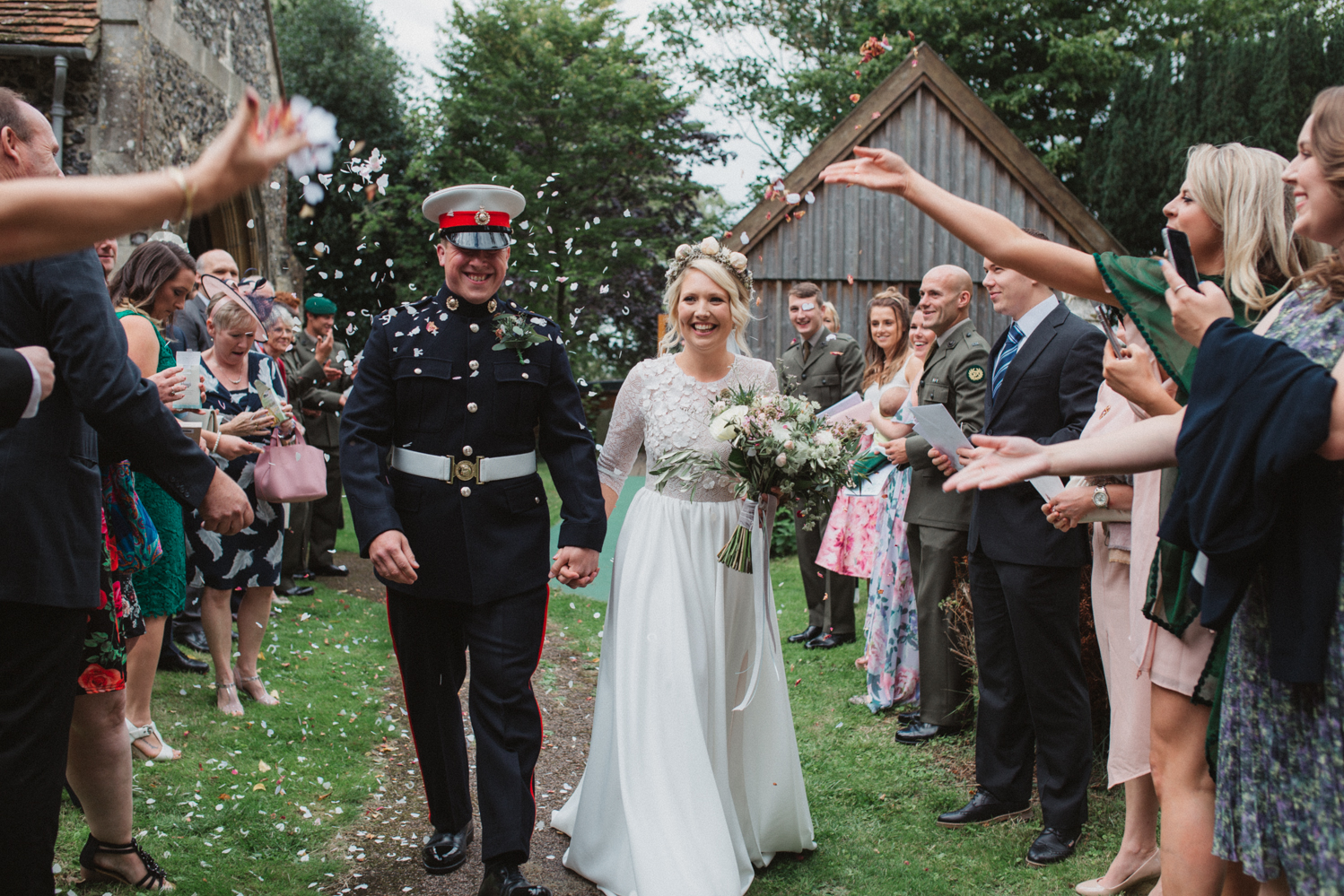 You can do all the prep work above, but what it comes down to is YOU! Head up – don’t stare at the floor or try and hide from it being thrown in your direction! Big grin (you won’t be able to help it), don’t walk too fast and maybe, just maybe, you could even give your spouse a kiss midway down the confetti line for a shot that’s a bit special. 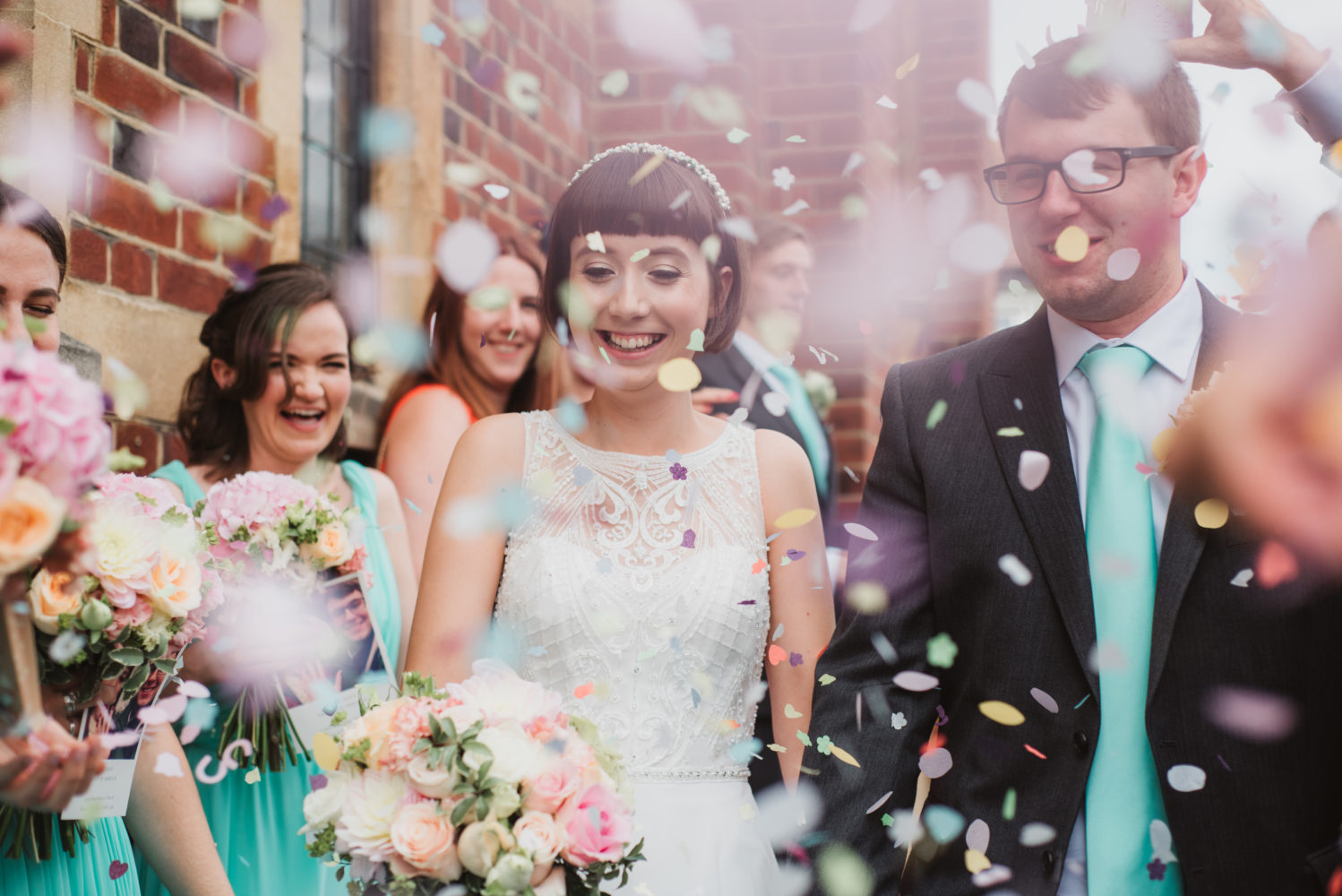 Although traditionally done just after the ceremony, you can incorporate confetti in other parts of the day too. Confetti canons can be amazing – the bigger the better! How about one during your cake cutting? How about a different coloured one during your first dance? Give one (or some) to your bridesmaids or groomsmen to make other parts of your day really exciting with the addition of confetti. Don’t forget to give your photographer a heads up though so they are prepared and ready to capture it when it happens! 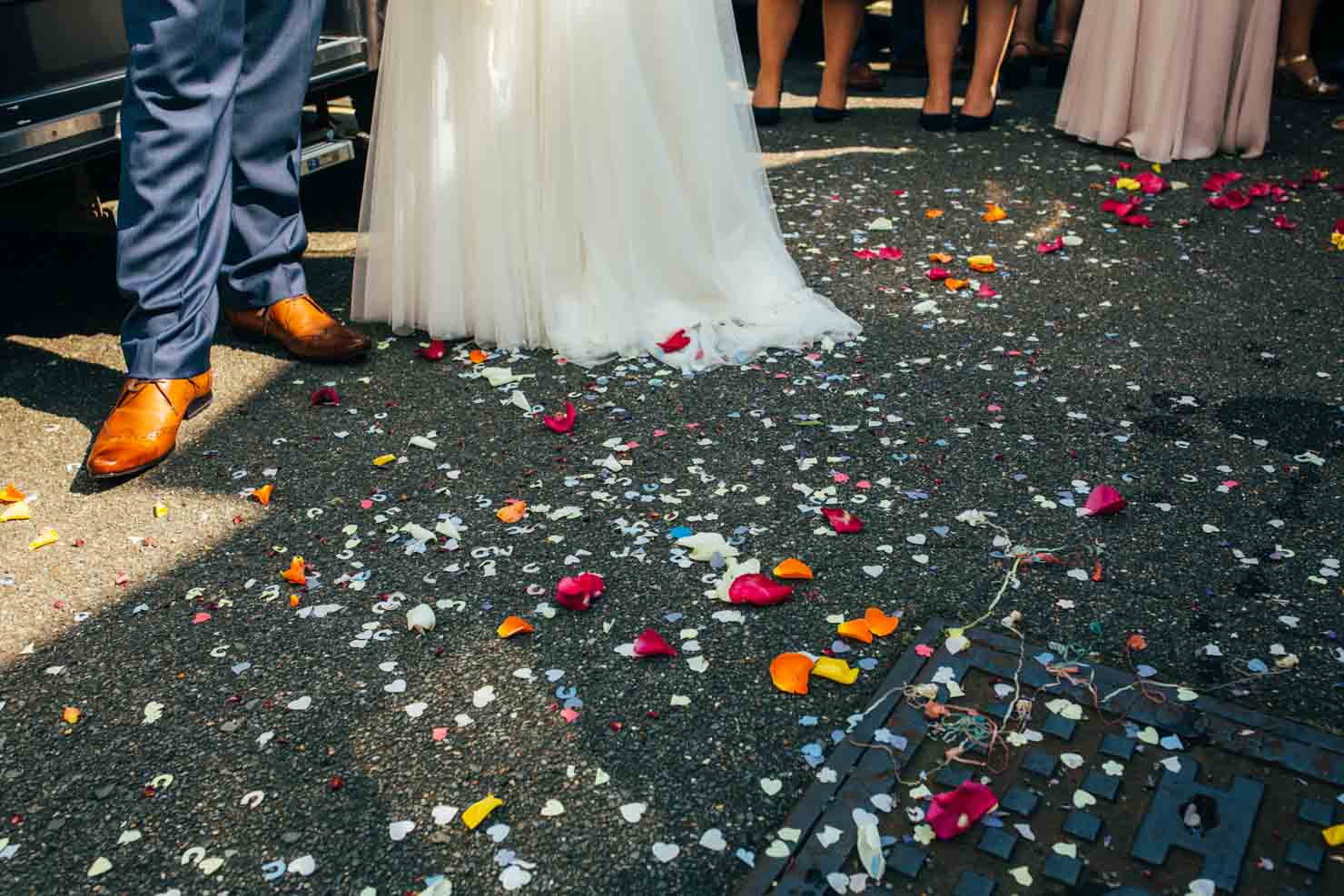 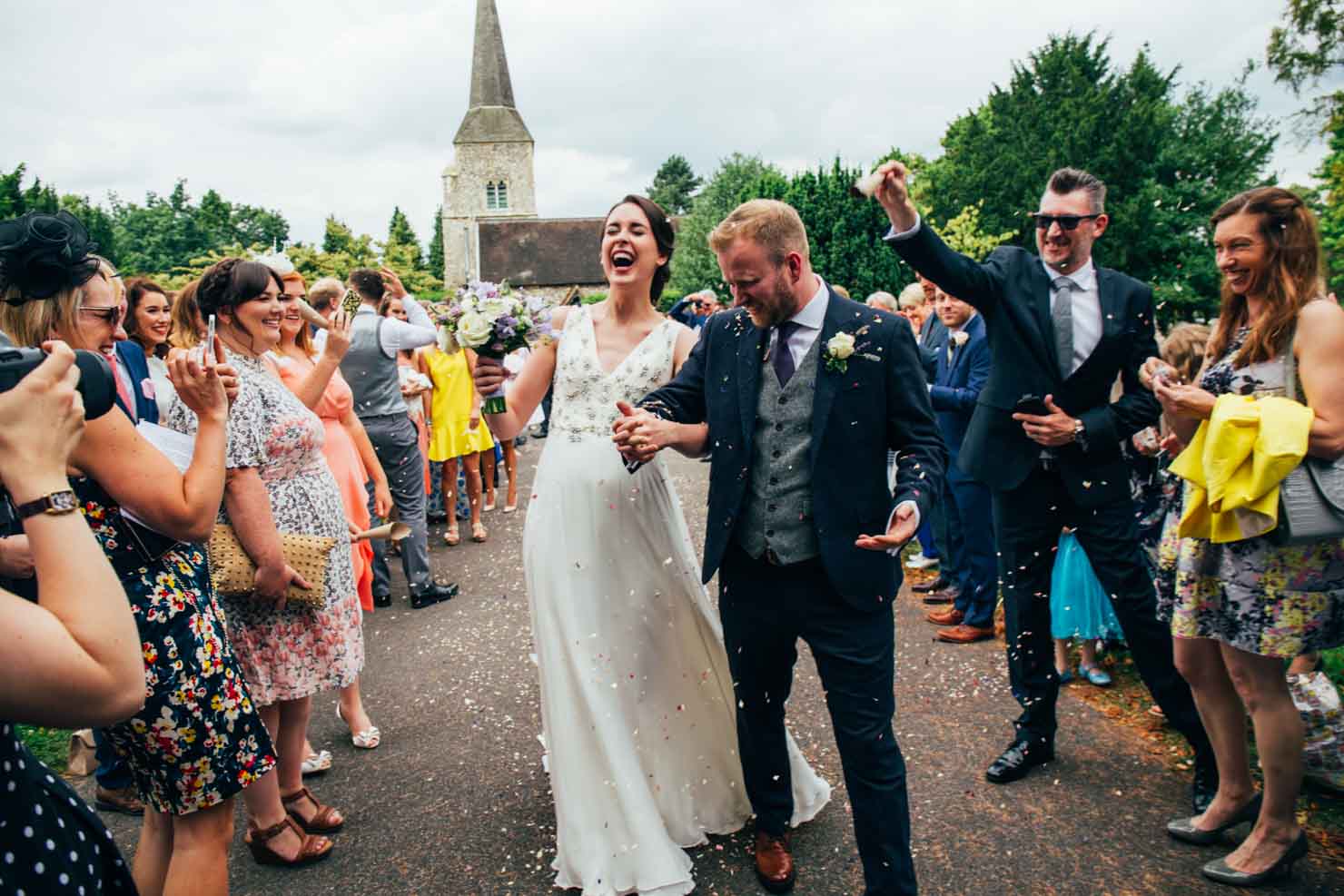 I hope my tips for confetti pictures were really helpful! If nailing your confetti shot on your wedding day now seems like a total breeze (it is, honest!), you might like to read the rest of my wedding planning series! Click here to read more of my wedding planning tips. If you’re looking for a wedding photographer in Suffolk, Norfolk, Essex or thereabouts and you think I might be the one for you, come and say hey! 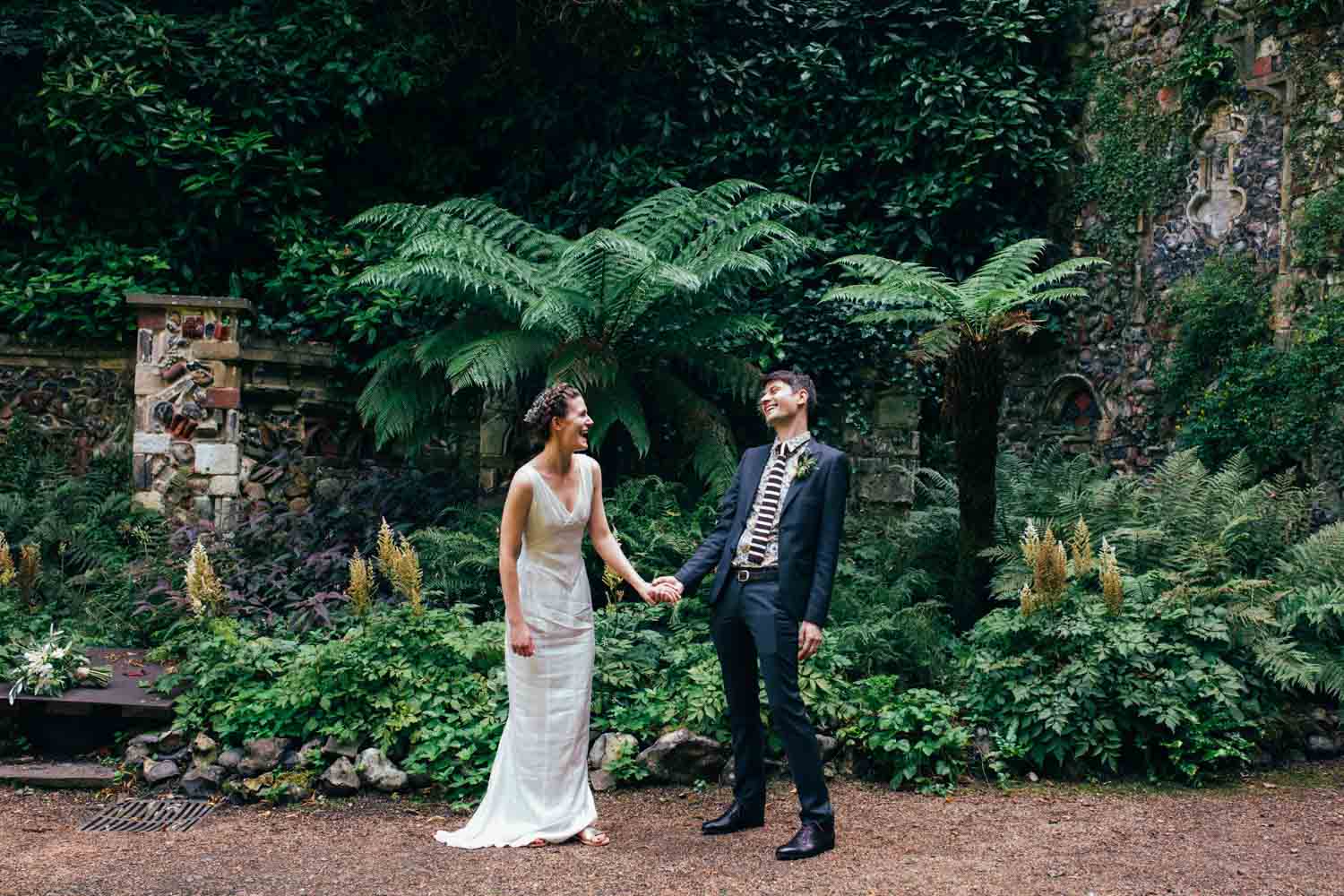 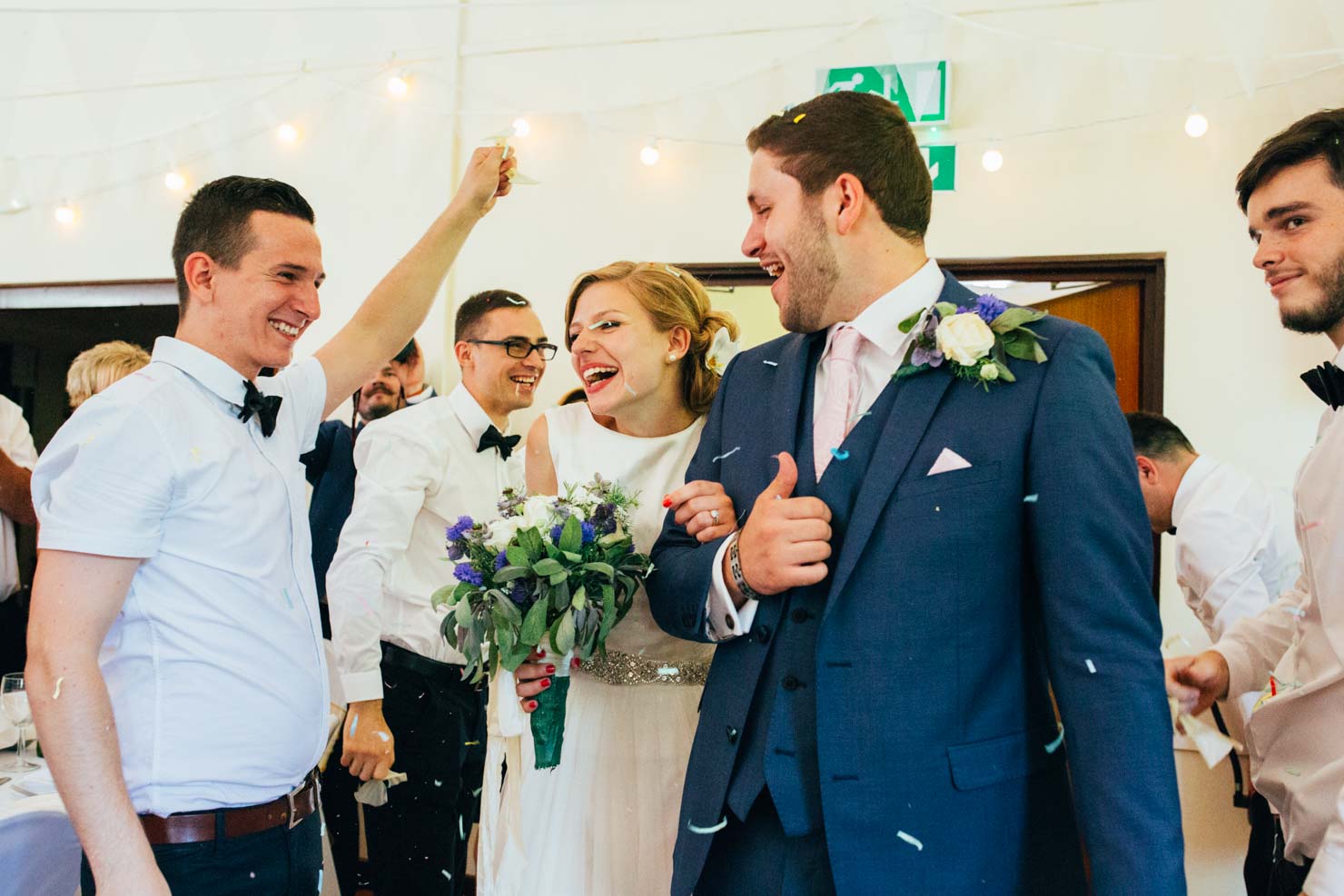 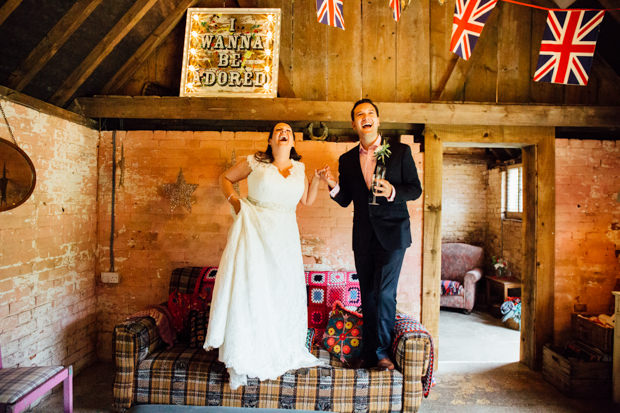